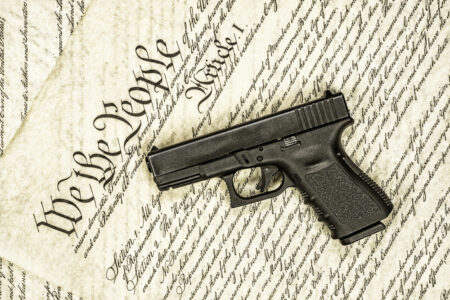 Most California gun owners are familiar with the California Handgun Roster. Those who aren’t can get up to speed here and here. The roster lists handguns that can be sold to law-abiding citizens in California. Handguns not listed cannot be purchased by Californians in stores or on the internet. As with most bad California gun laws, law enforcement is exempt. Law enforcement officers (LEOs) are free to purchase any handgun they like just as any American living outside California can.

Currently there are 818 handguns listed on the roster. This may sound generous, but many of the guns are the same model with slight cosmetic differences. Guns are removed from the list if the manufacturer does not submit a gun each year for safety testing and doesn’t pay the annual renewal fee. To add a gun to the list a manufacturer must meet the roster requirements which includes a micro-stamped ID number. Technology to create the micro-stamped ID doesn’t exist hence no manufacturer can meet the requirement.

You might think that California legislators would be too busy using the COVID-19 crisis as a basis to suspend the Constitution and create idiotic restrictions that harm millions of Californians to bother attacking the Second Amendment (2A). You would be wrong.

When the bill becomes law (and there’s no reason to believe it won’t) we will lose three semiautomatic handguns for each one added. The good news is that because of the impossible micro-stamp requirement few guns are added. The bad news is that minor cosmetic changes to currently listed models count as new guns and, under AB 2847 could trigger the removal of three other guns.

So far in 2020, four pistols were added to the roster, all S&W M&P Shields in 9mm. Apparently four of the same gun in different colors. If AB 2847 was current law, twelve semiautomatic handguns would be removed. For context, even without AB 2847, 66 guns were removed in 2019 and four so far this year including a Ruger GP100 revolver with a wood grip. Obviously a very unsafe gun unless you are a trained LEO.

I encourage Californians to get involved and vote anti-2A politicians out of office. Get out and vote and encourage your friends and family to do the same. Don’t sit back and depend on help from the Republican Party. That party has given up and is mostly impotent in California. They have no plan to regain power and are therefore unlikely to do so in the foreseeable future. It’s up to all Californians to get involved if we want a government that actually works for the citizens.

In addition I suggest people buy what they can while they can. Until the US Supreme Court (SCOTUS) rules that all these laws constitute infringement and are therefore unconstitutional, Californians will continue to be denied basic rights available to  Americans elsewhere in the country.

A challenge to the roster has made its way to SCOTUS but the Court has not decided if they will hear the case. Relying on SCOTUS is a duel edged sword as presently there is not a reliable majority of constitutionalist Justices on the bench. Ultimately it is up to the people to decide in what kind of country we wish to live.

Previous PostTo Ride, Shoot Straight, and Speak the Truth – 100 Years of Colonel Jeff Cooper
Next PostCCW Lifestyle Series # 8 – What do “No Guns Allowed” Signs Mean to the Legally Armed Citizen?