CCW Lifestyle Series # 8 – What do “No Guns Allowed” Signs Mean to the Legally Armed Citizen? 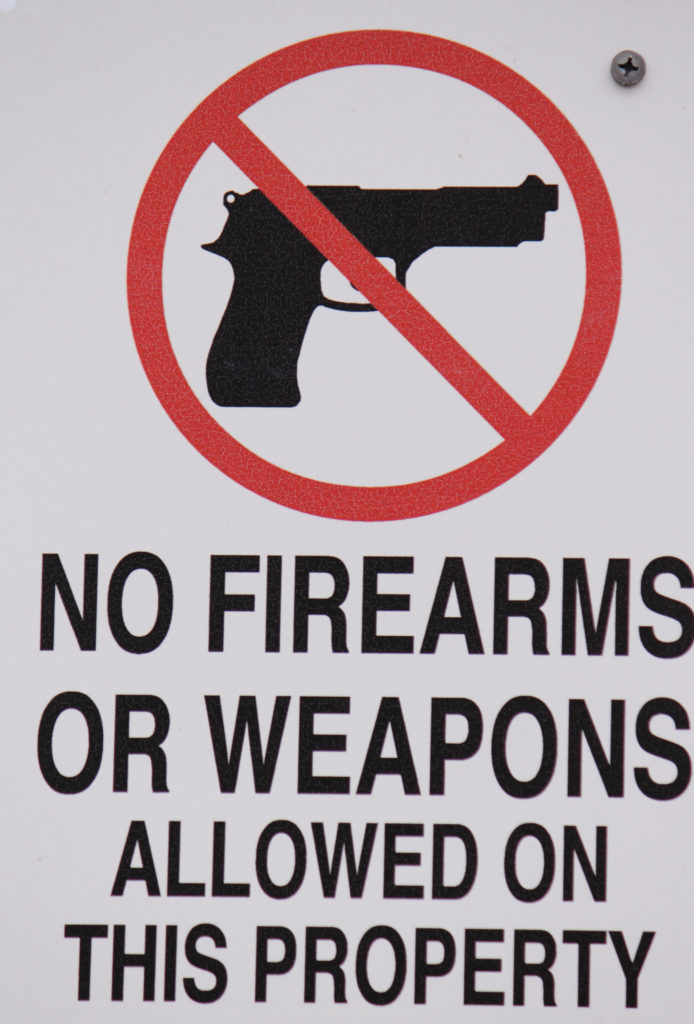 All legally armed citizens eventually encounter a “no guns allowed” sign. It’s surprisingly rare but occasionally you’ll see a business with one of these signs. What does the sign mean to those having concealed carry permits (CCW)? The short answer, at least in California, is nothing.

Laws regarding signage vary from state to state but in California “no guns allowed” signs do not carry the weight of law meaning there is no penalty for ignoring them. There are however some considerations of which to be aware.

Basically there are three choices when considering a posted establishment:

Ignoring the sign and going about one’s business is probably a choice many would make. Concealed carry means concealed. No one should be aware you are armed.

Someone carrying concealed in a business has no negative impact on the business, employees, or other customers and in fact makes the environment safer. The gun remains holstered, concealed, and poses no threat.

Many people including some gun owners make the case that a business owner has the right to set the rules for what happens on their property. It’s argued that to ignore those rules would be showing disrespect towards the property owner. The problem here is that while being armed poses no risk to anyone in the business, being unarmed increases the risk to the normally armed citizen. Something to consider.

You may choose to secure your gun in your vehicle while visiting a posted establishment. This requires the gun to be removed from the holster (or depending on holster type, removing the gun with the holster) and secured. This probably needs to be done while sitting in the vehicle and insuring no one observes what you are doing. Forcing the handling of a loaded gun under these conditions increases risk of a negligent discharge.

You may also choose to not enter the posted establishment and to take your business elsewhere. I don’t favor boycotts, but I do believe individuals have the right to decide where they’ll spend their money. There are two Sprouts Markets in my area that have chosen to prohibit firearms. Management probably believes the policy makes the stores safer for employees and customers when it fact it makes the stores less safe. I used to spend about $150 per week at Sprouts but now I don’t shop there. I could easily ignore the sign and go about my business, no one would know. But I’ve found there isn’t anything in Sprouts that I can’t buy elsewhere so I no longer shop in Sprouts.

As with many things in the CCW world, planning will go a long way. Think about where you need to go before you leave the house. Do you need to go any place where guns are prohibited? Can you go somewhere else? Do you have a way to secure you gun in your vehicle and a plan on how to do so?

I drive a truck that sits up high so transferring my gun from holster to safe discretely is not a problem. Since I carry OWB and the holster is attached to my belt I need to remove my gun to store it. I keep a small Kydex holster in my truck that I transfer my gun to and lock the gun and holster into the vehicle safe. Think about what you need to do before you need to do it and have a plan.