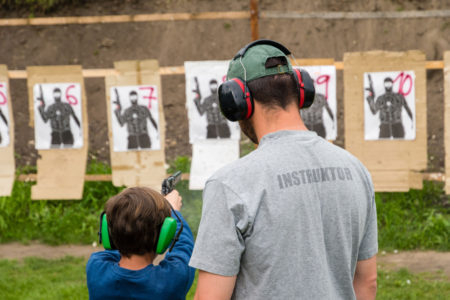 The word for today is hoplophobia. Bet you didn’t know that one. Marine Col. Jeff Cooper coined the word in 1962 and defined it as an irrational fear of firearms. You can read Col. Cooper’s thoughts on the subject here.

Col. Cooper was a legend in the firearms world and is recognized as the father of the modern pistol fighting technique. He was also the founder of the Gunsite Academy in Paulden AZ. If you haven’t heard of Col. Cooper you should probably get out more.

Cooper’s hoplophobia is an appropriate subject to examine given the current state of society in America. Some politicians along with the mainstream media have been encouraging this fear for the past fifty years. They’ve been very successful. The ultimate goal is to use that fear to disarm Americans.

Between one third and one half of American adults own guns. Those that don’t own guns learn about the subject mostly from what they see in the media. Most of the firearms related information in the media, be it in a news format or entertainment format, is incorrect. Much of it intentionally so.

Because many Americans are misinformed on the subject, they are more easily manipulated. This leads to uninformed support of ill-conceived and dangerous gun control laws.

For example, many of the 2020 Democratic presidential candidates are promoting dangerous and ineffective gun control schemes such as gun bans, confiscation, universal background checks, and red flag laws. They promote these ideas not because they believe the laws will increase public safety or reduce crime, but because they believe they will generate votes from uninformed, emotional voters.

In December of 2017 the Concealed Carry Reciprocity Act of 2017 (HR 38) passed the House and was sent to the Senate. This law would have allowed those having valid concealed carry permits to be legally armed while traveling throughout the United States. Individual State laws governing concealed carry would have been unaffected.

In February of 2018, seventeen people were murdered at the Marjory Stoneman Douglas High School in Florida. The resulting hysteria whipped up by anti-gun politicians and the media, and enabled by a hoplophobic and mostly misinformed public, caused HR 38 to be DOA in the Senate. The mass murder in Florida effectively killed HR 38 even though the two are completely unrelated. Cowardly politicians lacking courage and conviction abandoned the bill.

Hoplophobia is destructive and dangerous to all Americans. As gun owners we have a responsibility to educate others or, at the very least, to correct the misinformation whenever possible. People tend to fear what they don’t understand.

Firearms education and shooting sports have been almost completely eliminated from our schools. The result is that children grow into young adults without even a basic understanding of firearms or the role they’ve played throughout the history of our country.

So what can you do? Bring a friend or family member to the range for a first time shooting experience. If you belong to a shooting club, volunteer at their new shooter events. Get involved with groups that support youth shooting sports. Do what you can to help educate people and rid us of the irrational fear of firearms.

Previous PostHow Do You Really Fight Back Against Oppressive Gun Control Laws?
Next PostIt’s Not Just the Second Amendment Under Attack Today