The Joys of Reloading – Part Two, the Dillon Super 1050 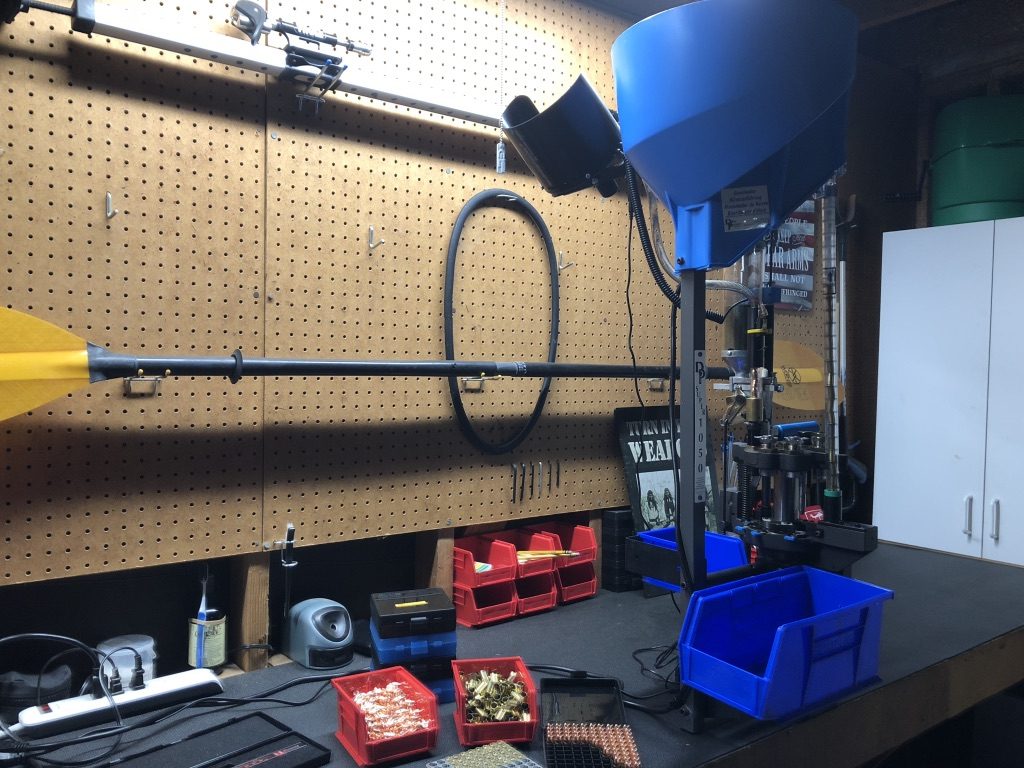 If you’ve been reading the articles on this page for a while, you may remember my first reloading article published in August of 2017. In that article I discussed my entry into the world of reloading and my reasons for learning to reload my own ammunition.

I started my journey with the Hornady Lock-N-Load Auto Progressive reloading press. I also mentioned that someday, my likely next step would be the Dillon Super 1050. Someday has arrived.

In the first article, I explained my motivation for learning to reload ammunition was driven by my uneasiness with our anti-gun, anti-second amendment government in California. Their attack on ammunition had already begun (see SB 1235) and I wanted to get ahead of the curve.

Since then I’ve learned that I enjoy reloading. I find it interesting and relaxing. It also cuts my ammunition cost by almost 50%. In addition, it allows me to “customize” my loads to get the right balance between power and recoil.

The Dillon is a significant step up from the Hornady in several ways, the most obvious being price. The Dillon lists for about $1812. In addition you should also plan on including a Mr. Bulletfeeder at a cost of $469. You can get started with the Hornady for less than $600.

I generally load about 700 rounds in a session. It takes me about 50 minutes to set up for a session. Set up includes laying out accessories (scales, gauges, ammo boxes, etc.), filling primer tubes, loading powder, lubing and inspecting cases, checking the press, and loading bullets. I’ve found, after setup, I can do about 700 rounds in two hours.

I tend to inspect my rounds about every 150 or so. Gauging and boxing the rounds slows me down, but I’ve reloaded over 15,000 rounds with no squib loads or double charges. I can live with the reduced speed. If I didn’t inspect and box, and had no stoppages, I could probably load 1000 to1200 in an hour.

The other thing that slows reloading is the fact that neither the Hornady nor the Dillon will run for 1000 rounds completely glitch free. Something always happens to cause a stoppage that requires a minor adjustment of some sort.

With both presses, if you have glitches they are likely to occur with the primer feed system. Primers are gravity fed (sort of) in both systems. The primers drop through a tube and are picked up by a slide that moves them into position. The primer is then pressed into the casing.

With the Hornady, the most frequent problem was the slide would fail to pick up a primer. This would result in a case with no primer having powder dropped into it. Obviously that resulted in a stoppage and the need for a minor cleanup.

The problem of choice with the Dillon seems to be primers becoming misaligned in the tube. This causes the primer to be positioned incorrectly and destroyed when pressed into the case. Other issues with the Dillon include the occasional double bullet drop or upside down case feed. Both require a momentary stop to correct the issue.

Overall the Dillon works as advertised and I’m very happy with it. Even with the occasional problem, the press is very productive and easy to use. The automatic bullet feeder and case loader make the press very fast, even with occasional stoppages.

Anti-gunners will continue to attack your rights in any way possible. Nothing is off limits or out of bounds for these people. They are currently targeting ammunition; your gun is useless if you can’t get ammunition. It’s only a matter of time before they go after reloading and attempt to restrict or ban supplies and equipment.

Previous PostThe Cost of Hesitation
Next PostAre You Now or Have You Ever Been a Member of the NRA? – Your Answer May Cost You Your Job