Taking the Cure to Stop Violence

[Editor’s note: The following letter by Gary Gonsalves, MD (assisted by Rob Morse) was originally published August 29, 2016 in CSA Online First,  by the California Society of Anesthesiologists. It is reproduced here by permission.]

Last week’s blog post, “Gun Violence:  When will we make a change?”, made an emotional appeal for legislative and research solutions to gun violence. However, extensive research already exists.

We all recognize the difficulties in changing social dynamics. It’s too easy to acquiesce to the less challenging course of blaming and banning inanimate weapons, when their operators are the ones at fault. The U.S. is actually among the safest countries on earth. 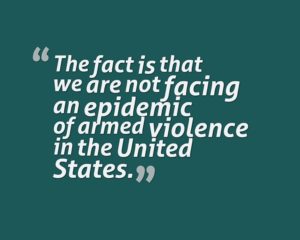 So let’s look at the facts, while we acknowledge the tragic effects of interpersonal violence.

The fact is that we are not facing an epidemic of armed violence in the United States. Rates of armed homicide declined 50 percent over the last 30 years, while firearms ownership doubled. Further, the U.S. ranks 11th in the incidence of mass murder per 100,000 when compared against European countries. The U.S. is more peaceful per person than France, Switzerland, Norway or Belgium over the last seven years. While statistics shouldn’t change our emotional reaction to human suffering, when properly employed, they can provide a foundation for critical analysis. So let’s consider the research.

In 2013, The National Academies of Science, Engineering and Medicine, in cooperation with the CDC, outlined avenues for potential research in a report, “Priorities for Research to Reduce the Threat of Firearm-Related Violence.” Meanwhile, ample research already indicates that at least four out of five criminals obtain their firearms illegally. Intuitively, we all know that criminals ignore gun laws, which explains why gun laws have no effect on the rate at which criminals use firearms. So why are we to believe that California’s seven new gun control laws are going to help? There are already 23,000 gun laws at the local, state and federal level. The truth is that criminals don’t follow the law, and making criminals out of law-abiding citizens does nothing to make us all safer.

A 2007 study from Harvard University asked the question, “Would Banning Firearms Reduce Murder and Suicide?”  The researchers concluded it would not, since “stricter laws don’t mean there is less crime.” After more than 20 years, the Brady Handgun Violence Prevention Act has failed to reduce suicide or homicide. Even gun control groups frequently admit that laws don’t stop criminals from obtaining firearms. As Josh Sugarmann of the Violence Policy Center said, “Handgun controls do little to stop criminals from obtaining handguns.”

If gun control laws worked, then the cities of Oakland, Newark, and Chicago would be our safest cities rather than some of our most dangerous. Gun laws don’t work because they fail to address the actual problem. Calling for more gun laws is a quick emotional – but irrational – fix, when we should instead implement the following approach as suggested by the CDC in a 2013 report:

“Effective approaches for preventing violence include early education through school-based programs addressing social, emotional, and behavioral competencies; parent and family-based programs promoting positive relationships, communication, support, and proper supervision; and efforts to improve school, neighborhood, and community environments in ways that reduce the likelihood of violence. Promoting the capacity of communities to implement such approaches might prove essential to achieving population-level impacts.”

As physicians, we all recognize the unintended consequences and potential adverse effects of well-intended prescriptions. What could be the harm in disarming law-abiding individuals?  Simply this:  many law-abiding gun owners own firearms for self-defense, and ordinary citizens may defend themselves without having to discharge a firearm. By some surveys, Americans use firearms for self-defense thousands of times per day. Indeed, when it comes to protecting victims of violent crime such as rape, a review of Justice Department data showed that active resistance and self-protective action with a weapon reduced the risk of rape and other serious injury. Further, as you would expect, gun ownership is most effective in protecting those segments of society that receive the least attention from police. Hence, personal firearm ownership, and positive attitudes toward it, are growing among urban minorities who own guns for their own protection, as gang violence is an unfortunate reality for them.

Yes, we have a persistent problem with violent gangs in some of our inner cities. According to the FBI’s 2011 National Gang Threat Assessment (the last year for which numbers were provided), there are approximately 1.4 million gang members in the United States. Gang members “are responsible for an average of 48 percent of violent crime in most jurisdictions and up to 90 percent in several others,” the report states. This means that 0.4 percent of our population is responsible for 48-90 percent of our violent crime. Note that California’s new gun control laws are directed at the 99.6 percent of our population that isn’t part of the problem.

Conversely, when we remove these same cities from U.S. statistics, our country becomes one of the safest places in the world. As a matter of fact, in Plano, Texas, which has the highest number of guns per citizen, the murder rate is so low that if Plano were its own country, it would have the second lowest homicide rate in the world. Clearly, we know what works to make us safe…and what doesn’t. Most politicians realize this, but use gun-control laws as an ineffective crutch because they are unwilling or unable to address the much larger and more difficult issue of inner-city social collapse. Meanwhile, honest citizens suffer under a growing burden of firearms laws and regulations.

But what can we do right now to decrease violence involving firearms today?

As a member of the Advisory Board for San Diego County Gun Owners, I pledge to do my best to implement strategies to effect substantial positive change. Via www.SanDiegoShootingSocial.com, I have personally overseen the firearms training of hundreds of doctors, nurses, and other medical professionals while raising money to support local charities. While not all things can be changed, no problem – including gun violence – can be solved until it’s faced in earnest.

—Gary Gonsalves, MD, is an anesthesiologist who practices in San Diego, CA.  He has introduced many medical colleagues to the responsible use of firearms.

— Rob Morse blogs, writes and podcasts about the right of self-defense. He competes in local IDPA matches and is an NRA pistol instructor.

All DRGO articles by Rob Morse.

Previous PostOpinion: Will Trump Follow Through with a Gun-Friendly Agenda?
Next PostCost of Gun Ownership