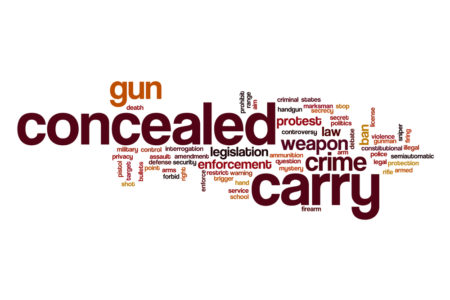 Recently I had the opportunity to attend a meeting of the Economic Development & Intergovernmental Relations Committee of the City Council of the City of San Diego (I apologize for that awful lead in sentence). The meeting was chaired by Councilmember Chris Ward and attended by Councilmembers Mark Kersey, Barbra Bry, and David Alvarez.

The anti second amendment Brady Organization and the equally anti 2A Moms Demand Action groups were attending the meeting in support of a proposed resolution (by anti gun Councilmember David Alvarez) in opposition to HR Bill 38 and Senate Bill 446, the national CCW Reciprocity Bills. A number of us from SDCGO attended the meeting to speak in opposition of the proposed resolution.

While legally the proposed resolution is meaningless it does make a political point and it provides a vehicle to spread false information and anti 2A propaganda. This is where all gun owners should be concerned. The false information spread by these groups is meant to provoke emotion (usually fear) in the public towards those of us that choose to exercise our second amendment rights. Unfortunately people tend to make decisions (i.e. vote) based more on emotion than on facts or logic.

The following are some examples of bias and misinformation experienced at the meeting. Members of the public are generally given two to three minutes to comment on an item on the agenda. When it became obvious that there were more people in opposition waiting to speak than in support, the public comment time was cut down to one minute each. In spite of this SDCGO members gave forceful comments and were not intimidated by the time limit most pushing out almost to the original allotted time. SDCGO member Wendy Hauffen did great job and was interviewed afterwards by a local news station, her interview can be seen here.

The two anti 2A speakers used their time to tell several whoppers including that national reciprocity would allow teenagers and violent criminals to carry handguns in California. Slightly out of context. Some states do allow 18 year olds to apply for permits and those permitted 18 year olds would be able to carry in California under national reciprocity. The fact that our military trains 18 year olds and sends them to war with no problems suggests that they can probably handle CCW just fine. Also those prohibited from owning firearms by federal law are barred from carrying firearms in all fifty states.

Councilmember Mark Kersey chose to use his response time to debunk many of the points that the anti gunners made in their comments and presentation. Kersey accomplished this by pulling up the Arizona Public Safety website and reading directly from the CCW permit page. The information on the page easily disproved several points made by the anti 2A speakers. Great job Councilmember Kersey!

In the end the resolution passed by a vote of three to one, Kersey being the only vote against. The resolution will now go before the full City Council for vote. I would encourage you to plan to show up at the full City Council meeting and speak against this resolution. SDCGO will provide details once the meeting is scheduled. While the resolution is legally meaningless these anti gun actions need to be challenged and defeated whenever they come up. If we don’t fight to protect our rights we may end up with no rights to protect.

Previous PostCCWs in San Diego push gun owners to vote Democrat for Sheriff
Next PostCCW – Is it Better To Carry With a Round Chambered or Not?