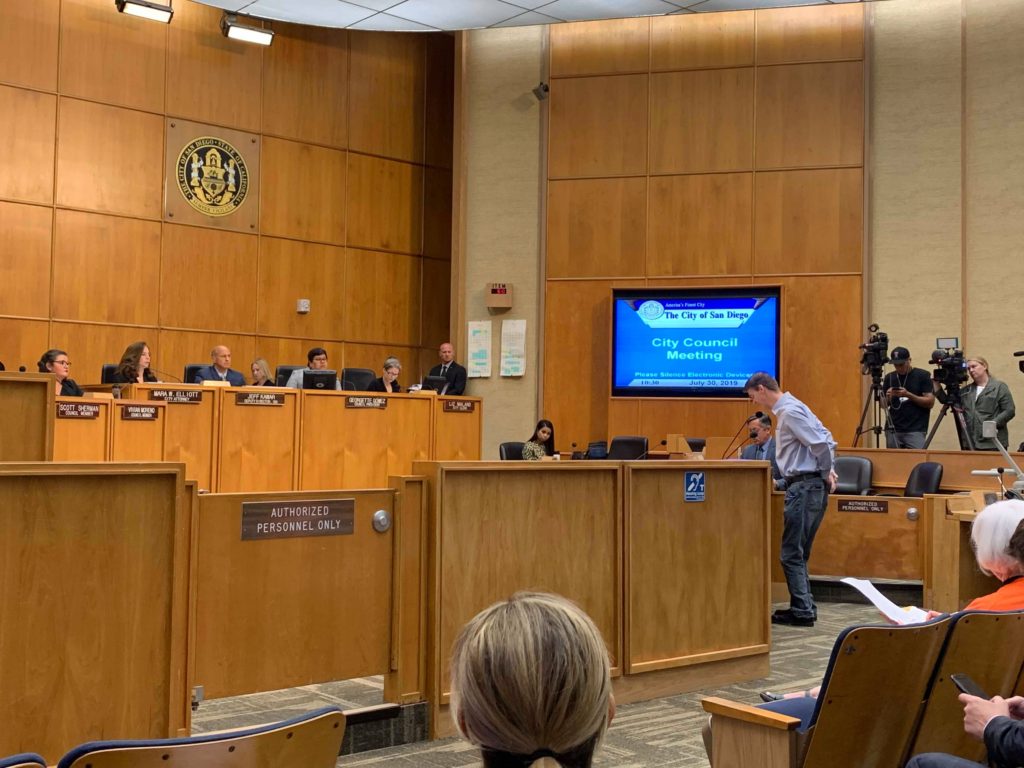 Tuesday, July 30th the San Diego City Council voted to require all gun owners within the city limits to keep their guns locked or inoperable while in the home. The vote was 7 to 2 with Chris Cate and Scott Sherman in opposition.  The penalty for violating this new, overreaching law? A fine and possibly even jail time.

San Diego County Gun Owners opposed the measure and made points to the City Council with a 15-minute presentation before the final vote.  But this article isn’t about the vote. It is about a truly disturbing trend that continued at the meeting. Rational, peaceful political discourse is crucial to good government.  We stand for the Second Amendment, and Moms Demand Action, led by Wendy Wheatcroft, stands against it.

However, rather than rational discourse, the scary trend is Wheatcroft’s group’s behavior escalating to be potentially dangerous.

In March 2018, SDCGO held a panel discussion with lawyers and activists at the state fairgrounds in Del Mar.  The purpose of the event was to educate gun owners on compliance with the confusing new laws. Days before the event, SDCGO received a disturbing phone call from the fairgrounds staff.  Their security staff were in fear for the safety of SDCGO attendees because they received information regarding direct threats, and as a result, required SDCGO to pay an additional $2,000 (doubling the cost of the event) for armed security from the Sheriff’s department.  Wheatcroft and her group, Moms Demand Action were named as part of the concern for safety.

Their disruptive behavior continued at a May 2018 Cajon Valley School Board meeting.  A school intern was recently let go because she protested the district’s decision to punish truancy.  Throughout the state, students were being influenced by school staff to leave school in the middle of the day as part of a demonstration related to the heinous murders in Parkland, Florida. Wheatcroft’s group, Moms Demand Action showed up to protest at the Board Meeting and was so disruptive that the Cajon Valley School Board, for the first time ever, needed El Cajon Police Officers to attend out of fear for public safety.

That brings us to Monday’s City Council meeting.  The Council opened the floor for comments and the first comment in opposition of the firearm storage regulation was an older man in a green polo.  He was unknown to SDCGO, but he also opposed the regulation. He gave a brief and general talk about the history of gun control in 1930s Germany and Hitler’s use of gun control to disarm German Jews. The speaker implied that the gun storage law is also motivated by anti-Semitism.

Not the direction I would have picked to go, but he has a right to his opinion.

Seconds into his 3-minute talk, one of Wheatcroft’s members broke into hysterics and loudly sobbed, just feet from the speaker.  She had to be escorted out of the council room and into the hall. She stood with Wheatcroft and unleashed a tirade of profanities at the top of her lungs.  For several minutes, in her red Moms Demand Action t-shirt, she screamed and yelled so loudly that she could be heard throughout the entire floor. She appeared to completely lose control of herself which intimidated others from leaving the meeting and instead, opting to wait until she had left the area.

This pattern of behavior by Wheatcroft’s followers is simply unacceptable and it is only getting worse.  It is particularly alarming since Wheatcroft recently launched her campaign to be the Democratic Party candidate for San Diego City Council.  SDCGO, on the other hand, does not tolerate this kind of behavior and demonstrates this by cancelling memberships and banning people from SDCGO events if discovered behaving violently or uncontrollably in a manner that Wheatcroft/Moms Demand Action appears to call normal.

Will Wheatcroft do the same with her member?

Which brings me to the title of this blog – Why They Don’t Like Guns.  Could it be that anti-gun extremists like Wheatcroft’s group Moms Demand Action do not like guns because they are afraid gun owners exhibit the same dangerous, irrational, and emotionally explosive behaviors that they themselves are guilty of exhibiting?  Anyone who has taken a basic psychology class is familiar with the concept of “psychological projection” – behavior that a person exhibits regularly is projected onto others. For example, a liar who doesn’t believe anyone else is truthful. Because the behavior of lying is normal for them, they project that same behavior onto others as also being normal.

Could this be the explanation for their erratic protests?  I’m not a psychologist so I certainly cannot make a diagnosis, but whatever the analysis, it’s clear that their behavior should be condemned rather than encouraged.

This sounds very close for terrorism.

Well the d’rats have been “projecting” their own faults on Trump and all republicans, conservatives, and libertarians while totally ignoring their own racism, sexism, greed, lying, and power hunger. Ergo, I see your point with the anti-gun crowd. However, too many d’rats hate people having guns because they know the vast number of gun owners in America are the only thing stopping these united States of America being forced into an extremely authoritarian, socialist, one world government, which they (stupidly) want.

I believe the woman you are referring to was Jewish and was reminded of her loss. The holocaust, left 6 million Jewish people murdered and entire families wiped out. I really hope that you all will not silently condone people who continue to post about “how anyone wanting to take our guns should be shot” this type of post is not freedom of speech. No one should be making statements like this especially not people who want to own guns or who are current gun owners. I think there is enough violence in the world and no one should be posting suggestive violent statements on SDCGO social media or any site. I hope that both groups can come together and dialogue, there are far more things in this world to keep people separated from one another and differences of views should not be a reason adults don’t dialogue when there is a conflict with values or views. I often find myself dialoguing with people about accountability, violence on my own page or in person. You will likely never be the best of friends with MOMS Demand Action but you can have a better understanding of each other’s views and values. I’d like to meet with anyone who is up to it. I want to learn more about SDCGO and would be happy to support a meet up. I grew up around guns, had guns all over my home and currently no longer own guns. I don’t wish to take the 2nd amendment right away. I do want people to be safe and I would like to look at ways that can be done from both sides. Peace and blessings!