Concealed Carry (CCW) – How Ignorance and Misinformation Hurts All Americans 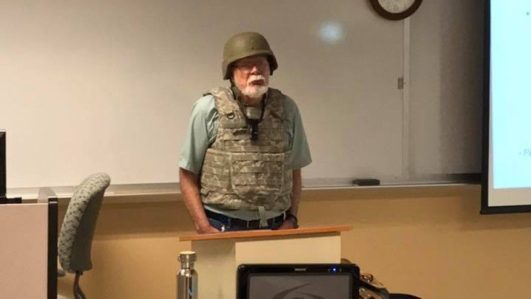 The antics of San Antonio College geography instructor Charles K. Smith are amusing and likely to inspire chuckles and an unbelieving shake of the head from most gun owners. Mr. Smith has chosen to teach his class wearing a camouflaged bullet resistant vest and helmet to protest the newly implemented Campus Carry law.

While this is America and people have the freedom to behave like fools, this level of ignorance from someone in a position of authority hurts all Americans. As responsible gun owners, each of us has an obligation to confront firearms related ignorance when the opportunity arises and hopefully do a little educating ourselves.

Campus Carry was signed into law in Texas in 2015 and allows CCW holders to legally carry on college premises. It was implemented at four-year institutions in 2016 and at community colleges on August 1st of this year.

Mr. Smith states that he now feels unsafe on campus “knowing that there are now more guns on campus than there should be”. He further states that “Used to be when they got mad at me, they had to go home and get the gun and had time to cool off. Now they will have it with them”. Smith also acknowledges that in his 10 years at the college no one has ever threatened him with a gun. You can read the full article containing Mr. Smith’s comments here.

There is so much misleading information expressed in the views of Mr. Smith it’s hard to know where to begin. Lets start with the behavior of CCW holders in general.

A recent study based on CCW information from Texas and Florida (the states with the most data collected over the longest period) found that CCW permit holders are convicted of crimes at a rate that is much lower than that of law enforcement (LE) officers. LE officers are convicted of crimes at a much lower rate than members of the general public. Overall CCW permit holders are an exceedingly law abiding and responsible group.

Texas has over 1.2 million CCW permit holders. The University of Texas system has 221,337 students and 100,312 faculty and staff. After one year of Campus Carry there have been no problems reported.

The statement “there are now more guns on campus than there should be” implies that the danger has increased because more law abiding, responsible armed people may be on campus. I guess the guns carried by armed criminals in Mr. Smith’s world fall into the category of guns that should be on campus.

One irony of Mr. Smith’s position is that he may actually be safer in the classroom because of Campus Carry. Contrary to what the political left and the media would like us to believe, classroom violence, especially at the college level, is very rare in this country. It is true that people using guns, knives, hammers, fists and even cars have attacked students and faculty members, but those events are fortunately not common. Isn’t it possible that lives might be saved were a legally armed and well-trained student or faculty member present should an incident occur?

There is much more that could be said regarding Mr. Smith’s ridiculous views but the point here is that we all have a responsibility to confront this kind of ignorance whenever possible. Please take the time to educate people regarding firearms when the opportunity presents itself. Also please join San Diego County Gun Owners and help us to educate the public and to elect those who respect and support our second amendment rights.

Previous PostThe Joys of Reloading – One Response to Ridiculous Ammunition Laws
Next PostOur Handguns Are Disappearing! – California’s Covert War on the Second Amendment

Good points. Perhaps it’s time for the professor to go live on a desert island?