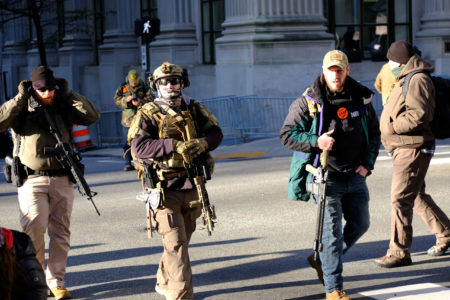 As part of the continuing “COVID-19 Crisis Theatre” being performed around the country, the expected, but late in coming, protests are finally beginning. In Michigan one protest featured openly armed protesters. This begs the obvious questions; are visibly armed protesters a good idea? And is this a productive approach? But there is a much deeper and more serious issue.

Let’s begin with the obvious. Generally it’s probably not a good idea for people to be visibly armed at protests where emotions tend to run high. To be fair, these protesters were law-abiding, peaceful citizens exercising their rights. This is a bit different than the violent, criminal behavior we’ve seen at protests from groups like Antifa and BLM. In general an armed society is a polite society.

I would also point out that it is perfectly legal in Michigan for citizens to be armed at the capitol, so the protesters were within their rights and behaving within the law. But is this productive?

The reaction from the gun-hating left was swift and predictable. Fear mongering is what they do best. As always, the protesters were labeled as evil conservatives and Trump supporters. State Senator Dayna Polehanki, a Democrat, described “armed men yelling at her” She added that “some of her colleagues were wearing bullet proof vests”! I can only imagine that these hysterical people live in constant fear of things in life of which they know nothing. The horror, the horror.

It’s interesting that as a society we’ve been conditioned to fear the sight of armed law-abiding citizens, yet we think nothing of seeing a dozen heavily armed police officers standing ten feet away from the citizens. Even Sean Hannity, a strong conservative and Second Amendment (2A) supporter got it wrong saying “the protesters endangered the safety of the police”. One could easily make the opposite argument.

The more serious issue is that the protesters weren’t supporting the 2A per se, they were there to protest the gross overreach and abuse of power by government under the guise of the COVID-19 crisis. The 2A is intended to allow the people to protect themselves from a tyrannical government. We don’t have that yet, but some would argue recent government behavior is moving in that direction. The protesters being armed, in this case, was symbolic but appropriate.

Americans should be shocked and outraged by the behavior of state governments all around the country. In California the Governor is creating a 20,000 member “contact army” to track down every COVID-19 victim. In Los Angeles the LA City Council (well known for their intelligence and rational decision making) has threatened to commandeer the properties of hotel owners that refuse to house the homeless. In Ventura County the government has vowed to track down each and every COVID-19 victim (forced testing?) and ensure they are quarantined (forced quarantine?). This in a county with just nineteen COVID-19 deaths in a population of 846,000. Government overreach?

As we begin to recover from the economic devastation caused by the unnecessary overaction to the COVID-19 virus I hope Americans remember. I hope they realize that the Constitution isn’t invalidated because politicians declare an emergency. I hope Americans ask questions and demand answers. I hope Americans demand change.