When Does A Citizen Have A Duty To Act? – Kyle Rittenhouse and Kenosha 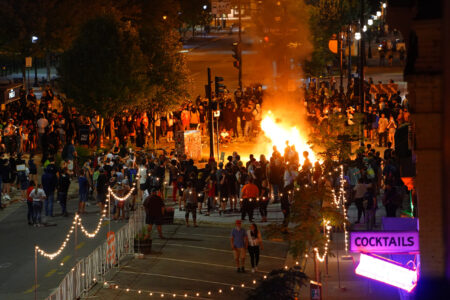 Many of you are probably familiar with the shooting incident in Kenosha, Wisconsin involving seventeen year old Kyle Rittenhouse. For those who are not, Kyle was part of a group that volunteered to help protect lives and property during the recent riots. At one point, Kyle was separated from his group and, due to police activity, was unable to rejoin them. While separated from the group, Kyle was chased and attacked by the rioters. When he could not escape he shot his attackers killing two and wounding a third. An excellent explanation of the incident based on the facts as of 8/18/20 can be seen here.

There are many opinions on this incident ranging from whether the shooting was justified to whether or not Kyle should have even been there in the first place. We won’t address those subjects here but instead will examine the two broader questions of why it was necessary for citizens to be in that situation and at what point, if any, do citizens have a responsibility to help their neighbors.

We’ll begin with the easier question. Elected officials, predominantly in Democrat controlled cities, have allowed rioting to go unchecked and have actually encouraged this behavior under the guise of peaceful protests. Police have been ordered to stand down and not interfere with the “protesters”. This irresponsible policy has resulted in hundreds of millions of dollars in damage to cities across the country as well as to injuries and loss of life.

Elected officials encouraging and attempting to use the unrest for political gain while preventing the police from intervening leaves citizens on their own. The result is incidents like the one involving Patricia and Mark McCloskey in St Louis and Steven Ray Baca in Albuquerque. Like the one involving Kyle Rittenhouse.

The cities experiencing the worst of the rioting have typically been under Democrat control for decades. If there truly are problems with policing in those cities then perhaps we should be looking at the political leaders. In any case rioting is never acceptable no matter the alleged reason and it’s the responsibility of elected officials and police to act swiftly to protect lives and property. We elect our leaders in this country, and I hope voters are thinking about this in November.

The second question is more complex. At what point does a citizen have a responsibility to defend his or her community, his or her neighbor, his or her family? Rittenhouse was not from Kenosha but lived about thirty minutes away and some argue that he had no business being there at all. He was there in response to a businessman’s plea for help in protecting his already damaged business.

Kyle was in Kenosha to help protect property and lives and to render first aid if necessary. Two of the three thugs he shot also were not from Kenosha. They were there to destroy property and do violence as is obvious from numerous videos and interviews.

In hindsight it’s easy to make the argument that Kyle should have been nowhere near Kenosha that night. But at what point do we have a responsibility to try to help our neighbors. Kyle felt he had that responsibility and so made his decision.

Some say there is a difference in defending your own property versus defending someone else’s and cite the Korean shop owners during the LA riots of the 90’s, many of whom lived in apartments above their shops. If it’s ok to avoid personal risk by not defending your neighbor then at what point (or is there a point) do you say I have a moral duty to help my neighbor? If you’re unwilling to help your neighbor then is there an expectation your neighbor will help you? If we are unwilling to help one another due to personal risk where does that leave us?

A seventeen year old boy made a decision to try to help someone in need and it may have cost him dearly. Fortunately others have stepped up to help him and he’ll now have a solid legal defense team that is well funded. There is a strong case for self-defense and hopefully it will work out for Kyle in the end.

So, at what point does a citizen have a responsibility to defend his or her community, his or her neighbor, his or her family? I don’t presume to provide an answer to that question but just to encourage you to think about it. One seventeen year old boy did but his answer is not necessarily your answer. Should the mob come to your community will you stand on your lawn and watch your neighbor’s house burn or will you help defend it? When the mob sets fire to your house, will your neighbor help you or just watch it burn? As you ponder those questions ponder this; in what kind of country do you wish to live?