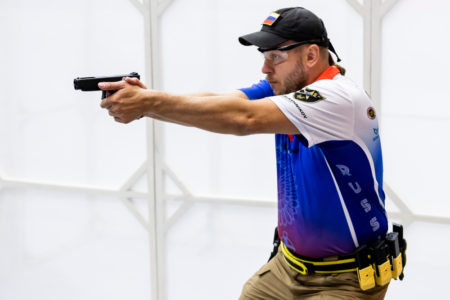 One of my goals for 2019 is to improve my performance in competitive pistol matches. I currently shoot USPSA matches and while I learn something and have fun at each match, I have lots of room for improvement. The goal this year is to become competitive and to that end I’m trying out a new grip technique.

Match scores depend on accuracy and speed. Competitors need to shoot accurately and fast. Stages generally require two shots on each paper target. The ability to shoot pairs accurately and quickly is critical.

A friend who is an extremely skilled competitor showed me the grip he uses and suggested I try it out. The grip involves sliding the support hand forward and using the base of the thumbs and torqueing inward to apply grip pressure to the gun. Bob Vogel, champion shooter, instructor, and former law enforcement officer explains the grip here.

I’ve been working to incorporate this grip into my shooting and have broken my training into the following three stages:

I’ve been working with this for about a month and I’m at the pair stage. I’m not at my goal yet but I’m seeing a noticeable improvement in accuracy. Patience is key. Remember that great shooters spent many hours training to become so. It just takes some time and work and you’ll get there.

Remember also that there are people out there working hard to take away your right to own and enjoy firearms. As a gun owner you have a responsibility to fight to protect those rights.

Previous PostFlee California or Stay and Fight – Who Wins?
Next PostSome Things to Consider Before the Next Mass Shooting