The Truth About Gun Shows 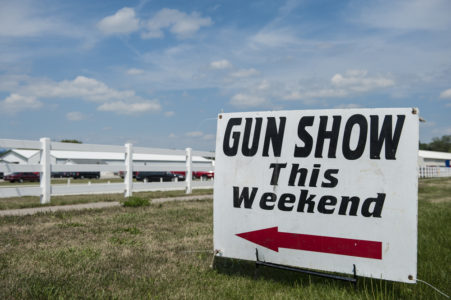 In case you haven’t heard, the evil Crossroads of the West Gun Show is back at the Del Mar Fairgrounds, at least temporarily. The gun show will return on September 28thand 29th. I hope all gun owners in the area will find the time to attend in a massive show of support for the show and those who fought to bring it back.

The gun show has been held at the Del Mar Fairgrounds about five times per year for over thirty years. There has never been a problem of any kind at the show let alone a shooting or arrests for the sale of illegal firearms. In spite of that, gun control advocates with the help of dishonest politicians want to deprive law-abiding citizens of the opportunity to enjoy this event.

Recently the politically appointed members of the fair board caved to pressure from a very small, very vocal group of anti-gun extremists (with help from Sacramento) and suspended future gun shows at the fairgrounds. Gun Show organizers fought back along with several Second Amendment advocacy groups and many community members. This resulted in a preliminary injunction allowing the Gun Show to proceed while the organizer’s lawsuit (which according to the judge is likely to succeed) is adjudicated.

If you’ve never attended the Gun Show you should make it a point to visit, you’ll be surprised. While the show definitely features guns, the number is less than you’d expect. There is also much more “non-gun” stuff than you would think. In addition, you’ll see several thousand normal Americans including men, women, children, and families. It’s really a nice event with food and drink and nothing like the left would have you believe.

So why are left wing politicians and gun control extremists so hard over about eliminating gun shows? Are they really dangerous? Do they really contribute to the ability of criminals to use firearms? Let’s take a look.

Approximately 2000 to 5200 gun shows take place in the United States annually. Guns sold at gun shows are sold by vendors possessing a federal firearms license (FFL). Background checks are required, and the 10 day wait period is in effect. In California, a private citizen wishing to sell a firearm to another citizen at a gun show must go through an FFL requiring the background check and the 10 day wait period. There is no “gun show loophole”.

Gun control advocates would have you believe that criminals and other prohibited persons regularly obtain guns through gun shows. A 2004 U.S. Department of Justice study of state prisoners who possessed guns while committing the crimes for which they were jailed looked at how the guns were obtained and found the following:

A 2008 study of crimes committed involving firearms in Pittsburg, Pennsylvania found that 79% of those firearms were obtained illegally.

The attack on gun shows by gun control extremists is just another example of the ongoing effort to demonize guns and gun owners. The truth is that gun shows do not endanger the public nor do they aid criminals. The fact is that gun shows are harmless examples of Americans exercising their Second Amendment rights and enjoying the freedom our country provides.

There are those in our country who would eliminate your Second Amendment rights. These same people are also intent on restricting or eliminating many other Constitutional rights Americans have always enjoyed. Each of us needs to make a choice about the kind of country in which we want to live.

When you’ve made your choice, you need to do a few things. Get involved. Become engaged. Educate yourself and others. The time for sitting back and letting others do the work (I don’t like politics; I just want to shoot my gun) is past. If you care about the future, you need to take part in creating it.