The Importance of the Gun Owner Vote 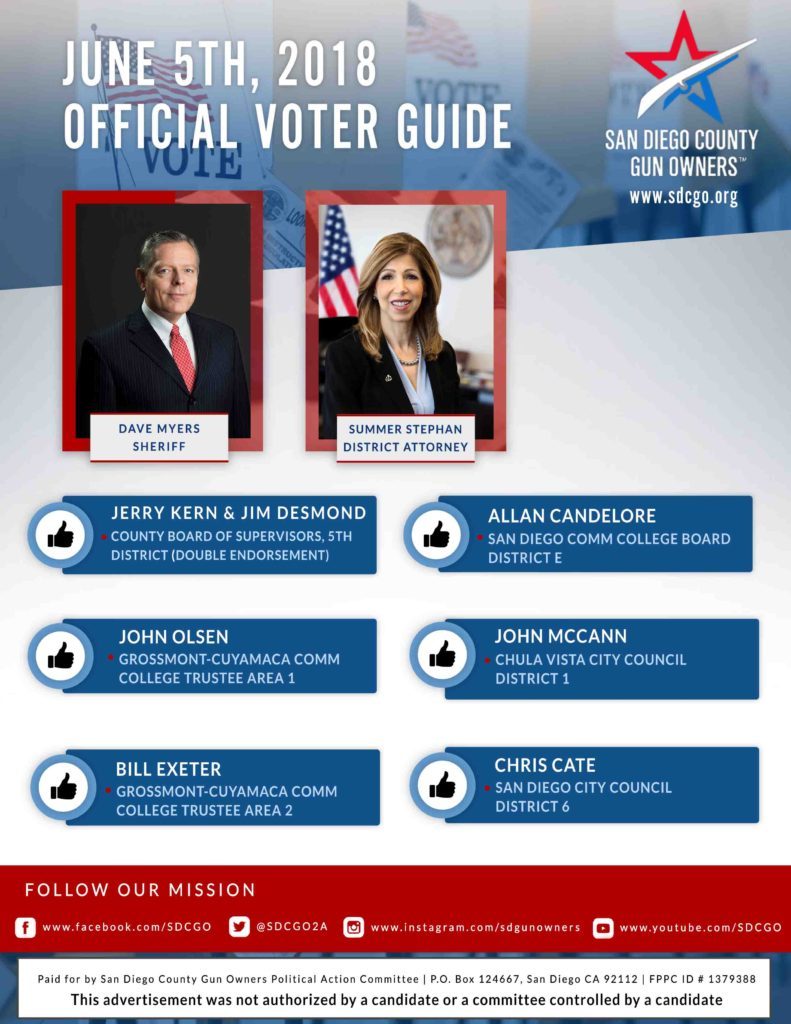 We in San Diego County have an extremely important choice to make on June 5th. Two men are running for Sheriff and, according to California law, which ever one wins the primary will be our next Sheriff. Who will be Sheriff in San Diego County will be decided in June, not in November. These two men have very different views on our Second Amendment rights in general, and on a citizen’s right to carry a firearm for self-defense (CCW) in particular. Gun owners can make a difference in this race and the Sheriff we end up with will likely, to a great extent, be the result of what gun owners do or don’t do in June.

We in California experience daily the awful consequences of electing corrupt politicians who have no respect for the country, the Constitution, or the people they are elected to serve. We have no one to blame but ourselves for this situation.

Regarding gun laws, we live in one of the most corrupt and backward states in the country. Our leaders consistently pass legislation intended to chip away at the Second Amendment and limit our rights. They are able to get away with this largely for two reasons.

The first is that citizens in general, and gun owners in particular, don’t pay attention to what is happening. People are focused on their day-to-day activities and don’t take the time to understand what their leaders are doing. This is further complicated by the fact that the media tends to be uninformed regarding the firearms community, and often reports false information. Sometimes this false reporting is intentional.

The second reason is that gun owners, in general, don’t seem to vote consistently. There is between 100 and 150 million gun owners in this country, one third to one half of the population. It’s reasonable to assume at least 25% of Californians are gun owners, about 10 million people. If gun owners took the time to educate themselves and to vote regularly there would be more than enough votes to change the situation.

Gun owners have an obligation to:

Gun owners need to take an interest. If gun owners don’t care about gun rights, we can’t expect anyone else to.

Previous PostFull Semi-Auto: Why Gun Owners and Anti-Gunners Can’t Have A Conversation
Next PostA Discussion With a Local Range Owner Regarding Carry Insurance