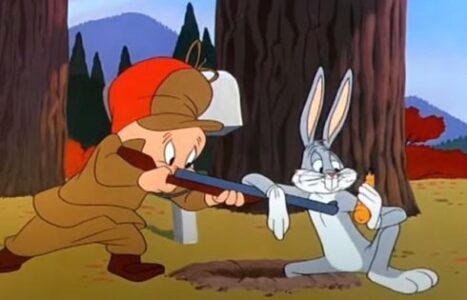 I wish I were making this up but it’s actually true. HBO Max premiered Looney Tunes Cartoons on it’s streaming service last week. Apparently, the cartoons featuring Bugs Bunny and Elmer Fudd will be similar to the originals with one glaring exception. Elmer will be “hunting wabbits” without a shotgun. That’s right, a hunter hunting rabbits without a gun.

In the words of Peter Browngardt, the series executive producer, “we’re not doing guns”. Rumor has it that Elmer will be armed with a scythe (I’m really not making this up). In the woke world of the left, other “cartoony violence” is acceptable. Elmer is free to use 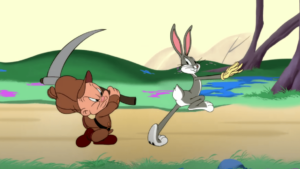 dynamite on Bugs or to drop a safe or anvil on Bugs, he just can’t shoot Bugs.

Aside from ruining an iconic bit of American culture for the sake of political correctness what else is happening here? I realize these are just cartoons, but you need to remember that various Looney Tunes and Merrie Melodies cartoons have been nominated for 22 Academy Awards and have won five Oscars over the years. They really are a unique part of American culture.

So what is really going on? This isn’t a violence issue as “cartoony violence” is acceptable. The left seems to still retain some capability to distinguish between make believe and reality. At least they can do this in areas that don’t involve firearms.

When it comes to firearms, fantasy is reality for the anti-gun left. We’ve all heard outrageous claims about power, capacity, rate of fire, lethality, and the evil associated with gun ownership. Nothing based in reality but that doesn’t seem to matter.

In the case of Elmer Fudd they don’t object to the violence, they object to violence involving a gun. Mind you this is a cartoon involving cartoon characters and the violence isn’t real. Sober, rational adults might also observe the cartoon depicts a hunter hunting a rabbit, something that traditionally involves a shotgun. Rabbit hunting with a scythe is considered somewhat untraditional.

The real issue here is again the subtle implication that guns are bad and gun owners are bad. Anti-gun forces have been using this technique to gradually erode the Second Amendment rights of Americans for the last fifty years. They’ve had a fair amount of success.

But it’s now become bigger than just anti-Second Amendment propaganda. Our basic right to free speech is now under attack and with it our American way of life. Anyone expressing an opinion contrary to that dictated by the left is attacked. Everything is offensive. It doesn’t matter if the opinion is simply a statement of fact or just a harmless attempt at humor. For example:

These are just a few of many examples. Of course there is no limit to what can be said if the subject is aligned with current left wing thought. Washed up, never has been actor Tom Arnold recently called for armed attacks on police citing the Second Amendment. Neither his disgusting speech nor his gross misunderstanding of the Second Amendment is criticized at all. No Twitter, Facebook, or YouTube terms of use were violated.

Words are important. How we use words and how we tolerate the misuse of words by others has consequences. Allowing our thoughts to be controlled and our opinions to be silenced is dangerous to our freedom. Gun owners can no longer remain silent and allow attacks on our rights to go unchallenged. Speak up and defend our rights. All Americans need to speak up and defend our country.

Previous PostCCW Lifestyle Series # 8 – What do “No Guns Allowed” Signs Mean to the Legally Armed Citizen?
Next PostHow to Legally Transport Firearms in the Peoples Republic of California