It’s Time for an Adult Discussion About School Shootings 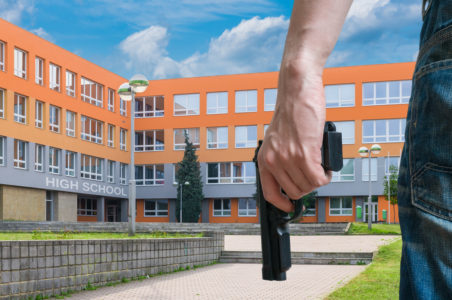 In light of the recent school shooting in Florida, the San Diego Union Tribune decided to examine the pros and cons of allowing school staff to be armed. They approached SDCGO for someone to write the pro Op Ed and I got the call. You can see the pro Op Ed here and the counterpoint article here.

Lets start with some facts:

When you read the Op Ed opposing arming school staff it quickly becomes obvious that the author has very little knowledge of firearms or the gun community. He claims to have that knowledge since he grew up in the south and hunted ducks as a teenager. He also shot skeet in a PE class in college. Not exactly Massad Ayoob.

I can speak to his lack of knowledge because my background in that respect is similar although my current level of knowledge is much different. I hunted rabbits and birds growing up. When I joined the Navy out of high school I packed my shotgun away and didn’t touch it again until about three years ago.

Had you talked to me five years ago you would have found me as clueless as that author. I would have agreed to an assault rifle ban and a magazine ban. Why do people need military weapons? Why do people need high capacity magazines? I was completely clueless just like that author. We could have a more productive discussion if the people demonizing guns and gun owners knew something about guns. Of course if they did they wouldn’t be demonizing them.

If we believe that for now we are unable to prevent these horrible incidents then the question becomes how do we stop them as quickly as possible with minimal loss of life? We should keep in mind that there is no best solution for all schools. Each district working with the community and local law enforcement should decide how best to protect their schools. The following are some possible approaches

Once we admit that only an armed defender can stop an armed attacker we can consider more proactive options.

The above are only some possibilities. Again the right solution for a particular school needs to be determined by the local district, the community, and LE. Sacramento has removed that power from school districts in California with the passing of AB 424, which was signed, into law in October of 2017.

Whatever the short-term answers, we can’t get there until people can sit down like rational adults and have an informed, unemotional discussion of the problem and possible solutions.

Please realize that each time an incident occurs, it will be used as an excuse to further restrict your rights. If you want to keep your rights defend them by joining San Diego County Gun Owners, the California Rifle and Pistol Association, and the National Rifle Association. Join the fight and help us restore and preserve our second amendment rights. Together we will win.