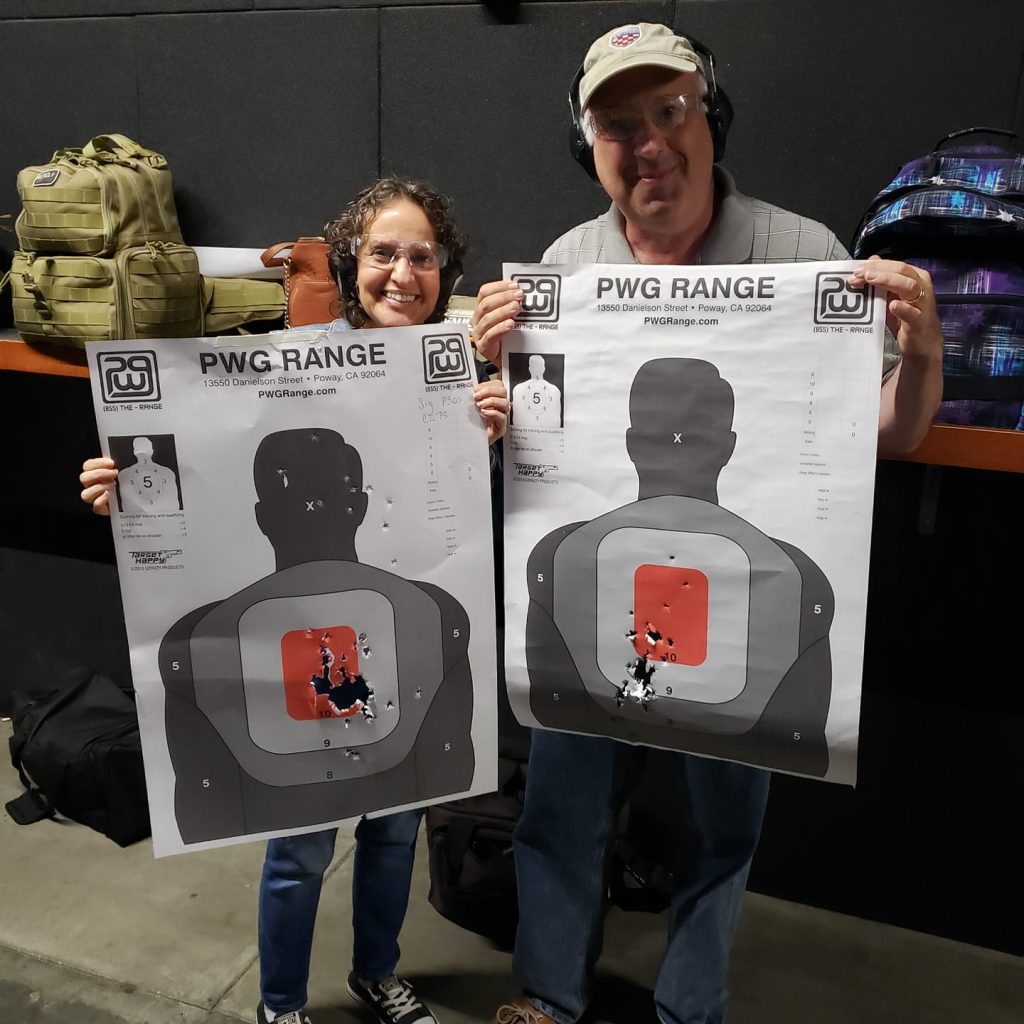 This is a guest post by Alex Dovgalevsky, Director of Guns N’ Moses, a Jewish Shooting Club.

On Sunday, after our club’s 13th shooting social with SDCGO, I took the time to reflect on what happened over the past year. The full experience will be hard to describe in just a few paragraphs, but if I can share even a few important moments, it will be worth it.
First, a little about our club. Guns N’ Moses is a Jewish Shooting Club which was created by and for members of our community to continue to train more frequently and learn new skills in armed self-defense. As the club grew, we saw some interest not just from existing shooters, but also from members of the community that never shot before but were very interested in starting. So we opened up our club events to first-time shooters and would get between 1 and 4 attending our events. A few experienced members would teach safety and fundamentals, as well as mentor new shooters on the range.
As the Jewish community experienced more and more violence, from street attacks to deadly assaults at our houses of worship, the idea of armed self-defense became top priority among many observant and secular Jews. Our membership grew after murders in Pittsburgh and in Poway.  But, by far, the biggest and most lasting membership increase happened when pandemic lockdowns, unobstructed street violence, and restrictions of law enforcement brought back many chilling scenes we recognize from our history.
For Guns N’ Moses, this chance to teach life-saving skills to members of our community, while also adding lifetime supporters to 2A causes, was a great opportunity – but it was an opportunity that almost slipped through our fingers. It happened at a time when ranges wouldn’t allow more than one person per lane, when ammo wasn’t available for purchase at any price, and even buying firearms was becoming very difficult. On top of that, our club just didn’t have enough experienced mentors to be able to train all the new shooters that required one-on-one instruction.
SDCGO came to the rescue, and not for the first time. Michael Schwartz had already attended our meetings to advise us on obtaining CCWs and share information about local 2A politics. We have also had help from SDCGO board member Gina Roberts and a few others who attended our meetings to help with training and RSO duties.
Having been a mentor at a number of SDCGO’s shooting socials, I knew how safe and educational these events are.  So I reached out to Michael Schwartz and asked if we could do a shooting social just for my club. Despite the organizational difficulties and the fact that we could only meet on Sundays, he immediately agreed.
Our first event was filled overnight, plus a waiting list was formed. We took up every single lane at Poway Weapons and Gear’s 50yd range, and 20 shooters – half of them over the age of 60 – paired up with SDCGO mentors for their first experience with handguns.
How does one really determine if an event is an absolute success? When majority of participants ask, “when is the next one?”
If I were to raise lots of money and pay professional, full-time instructors to come and individually train all of our members, the program would not be as successful. SDCGO mentors bring the kind of enthusiasm and attentiveness that cannot be faked or bought, but can only come from passion for what they do and deep respect for who they’re doing it for.
On behalf of all of us at Guns N’ Moses, and the Jewish community that has become safer as a result of more “good guys (and girls) with guns”, I want to give deepest and sincerest thanks to all the shooting socials Mentors and RSOs, to all the selfless volunteers, to ALL the SDCGO Members, to SDCGO donors, and to all the board members – THANK YOU ALL VERY MUCH! TODAH RABA!