Gun control is killing our kids 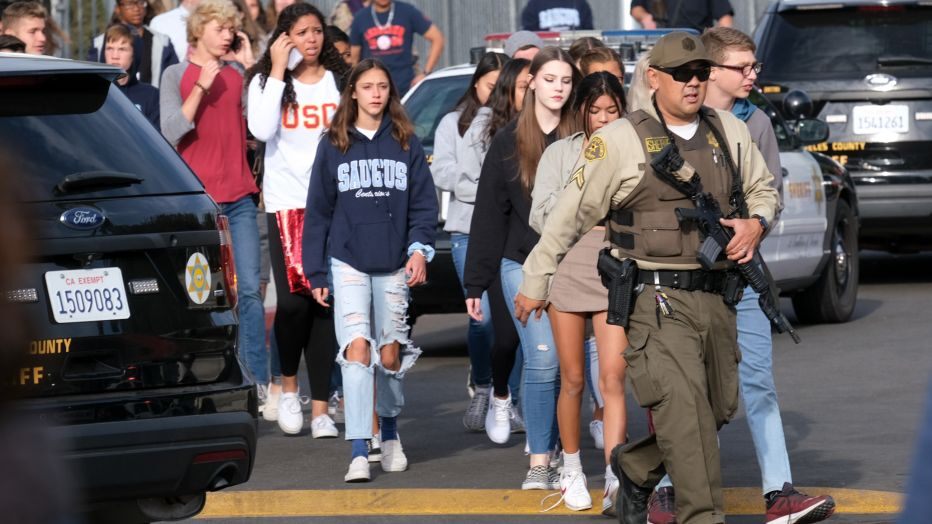 This is a guest post by 17-year-old high school student Kaylee Allen.

On November 14th, 2019 a gunman walked into my school where I was an 11th grade student.  Saugus High School was a place I felt safe and protected, but on that day, his intent was to kill. At 7:38am he pulled out his gun and started firing. Yes, another school shooting, but this time, it was happening to me.

I was standing with friends, just up the stairs from where he was, when a girl came running up covered in blood. My friends grabbed her, and we all ran into a classroom where I waited to be protected. This girl had been shot in the abdomen and we tried to help her.  As we tried to help her the only thing I could think was, we are going to die here. Nobody is going to protect me.  I’m not as safe as I thought.

We stayed there in the classroom.  Terrified, we talked about our weekend and made jokes.  We were trying to relieve the tension, but nothing could hide the pure fear and tears on our faces. It took a really long time to announce the lockdown and even longer for the armed police to get to us. We had finally gotten out though.

Almost immediately gun control was brought up in relation to our school. We didn’t even have all the details yet. How could they possibly know gun control would have helped? Why couldn’t they give us a chance to breathe and grieve for those lost, before making it political?  Did they really want a solution or were we being made a part of an agenda that already existed and wasn’t really about us?

As more information was released I began to think and evaluate.  I began to like the idea of guns more then ever.  My experience with guns wasn’t much before that day.  My family owned them and I tried shooting guns a few times growing up.  I had never thought about a gun as a tool for safety and security.  It was clear to me, that the only thing that saved lives of so many who could have been killed that day, in my school, where I thought I was protected…were the good guys who finally came with guns.

The shooter had used a “ghost gun.” A gun that did not meet our California requirements and was already considered illegal due to some of our strictest gun laws in the country. Yet, they still shouted gun control as if they really thought it would change anything. As if the shooter would have followed the law. As if any of it could have been prevented if they just had more laws.

The next piece of information to come out, really made me mad.  They were using our shooting to push for gun control. They wanted to restrict and control the one thing that would have saved my friends and ultimately stopped me from being killed.  We found out, after the first shot, his gun had jammed. It took him time to fix his gun and continue to kill.  It all could have been stopped after that first shot, if only one good guy had a gun. If only I were as protected in school as I should have been.

That’s not what happened though. Instead he fired a shot, his gun jammed, HE FIXED IT, then shot more people. Yet they continued to blame the gun. That’s when I lost it and decided I was going to be the school shooting survivor who stood up for guns instead of against them. Inanimate objects can’t kill people but if we are going to blame an object, let’s blame the “Gun Free Zone” signs. Those signs are really what is killing us. That sign tells criminals that everyone in here is unarmed and no one will stop you.

If you want to save the children, arm our teachers and arm our administrators. Your “gun free zone” sign works just as good as your “tobacco free campus” sign which is not at all. The fact that I feel safer at a gun range than I do at my school says a lot about the anti-gun narrative. Gun control is killing our kids. Gun control is to blame for mass shootings. Stop playing on the emotions of traumatized children to gain more government power and actually do something to help us. Gun control groups don’t actually care about us, they just want to control the people and advance their agenda.  They use tragedy to push an agenda and only make the problem worse.

Gun control groups pretend everyone in a school shooting is on their side.

We are looking at the trends and facts and we can see that more gun control means more shootings. Stop being greedy for power and save our children.  Stop punishing law-abiding gun owners, treat mental health, and lift the ban on the one tool that can effectively save kids from being attacked: a gun.

Previous PostDefense Against Mobs – An Interview with Massad Ayoob
Next PostWhen Does A Citizen Have A Duty To Act? – Kyle Rittenhouse and Kenosha