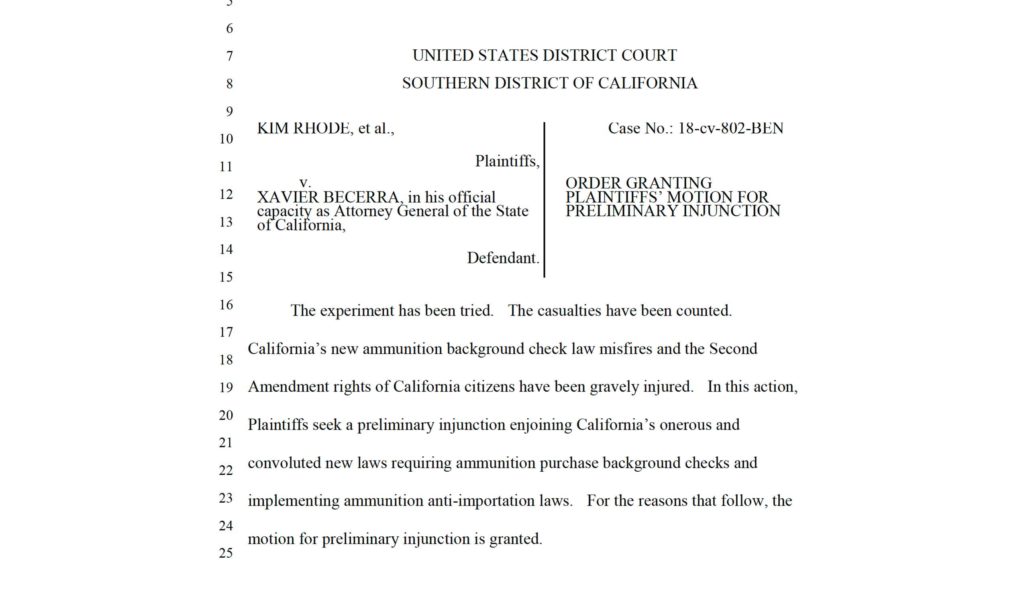 California Judge Benítez of Freedom Week fame just issued a decision in the Rhode vs. California lawsuit to get rid of the background checks required for ammunition purchases. So is it good news? No. It’s great news! Check it out.

The intro is amazing:

"The experiment has been tried. The casualties have been counted.

The purported state interest to be achieved by these new laws is keeping ammunition out of the hands of prohibited Californians. These new laws are constitutionally defective for several reasons. First, criminals, tyrants, and terrorists don’t do background checks. The background check experiment defies common sense while unduly and severely burdening the Second Amendment rights of every responsible, gun-owning citizen desiring to lawfully buy ammunition.

Second, the implementing regulations systematically prohibit or deter an untold number of law-abiding California citizen-residents from undergoing the required background checks. Third, in the seven months since implementation, the standard background check rejected citizen-residents who are not prohibited persons approximately 16.4 % of the time. Fourth, the ammunition anti-importation laws directly violate the federal dormant Commerce Clause.”

And the decision ends with:

Defendant Attorney General Xavier Becerra, and his officers, agents, servants, employees, and attorneys, and those persons in active concert or participation with him, and those duly sworn state peace officers and federal law enforcement officers who gain knowledge of this injunction order or know of the existence of this injunction order, are enjoined from implementing or enforcing the ammunition sales background check provisions found in California Penal Code §§ 30370(a) through (d) and 30352, and the ammunition anti-importation provisions found in §§ 30312(a) and (b), and 30314(a) as well as the criminal enforcement of California Penal Code §§ 30365, 30312(d) and 30314(c)."

Together, We Will Win!