Can You Access Your Home Defense Firearm in Time to Make a Difference? 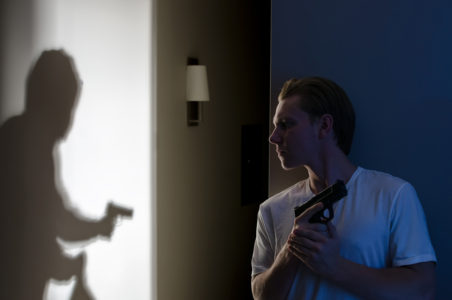 As a gun owner, could you access your firearm in time to defend your family? Hopefully this is something you’ve considered, if not, now is a great time.

There was a story in the news recently about a mother who used a handgun to defend herself and her children from an attempted home invasion. The frightening incident can be seen here, captured on the home’s security camera. Notice the house and the neighborhood, this could happen anywhere.

Fortunately, this woman was able to quickly access her firearm and end the criminal attack. But what if her firearm wasn’t readily available?

Many of us store our firearms securely in a safe to deter theft, and to prevent unauthorized access. This wasn’t always the case. Growing up, I remember many friends and relatives who stored guns in a way that made them completely accessible. My shotgun lived on a rack on my bedroom wall.

Guns were often displayed openly on racks or in glass cases (owners were proud of their guns). There never seemed to be any problems with that approach.

Today our society is different and locked storage is the accepted practice. Still, experts say that if you can’t access a home defense firearm in two to three seconds it likely will be of no use to you.

Fortunately we have many options available. There are numerous quick access lock boxes offered in the marketplace today. If children are not present, you may choose to forgo the lockbox at night.

In my case, my gun is readily accessible at night and is either on my person or back in the safe in the morning. The increased awareness I developed through my CCW experience, made me realize that having my gun locked in the safe at night rendered it completely useless as a self-defense tool.

Think about your home security. Can you see someone standing at your front door (or crouching off to the side)? Do you typically keep your doors and windows locked? How about at bedtime? Do you have access to a firearm from your bedroom? What about a flashlight? Is your cell phone in the bedroom with you or out on the kitchen counter charging? These are things you should consider ahead of time.

Gun control laws, in addition to making us less safe on the street, make us less safe in the home. Attempts to pass laws requiring guns to be stored in a non-operational condition have mostly been defeated, but anti-gun fanatics keep trying.

It’s important for gun owners to educate others, and to become engaged in defending our second amendment rights. The best way to stop dangerous gun control laws is to elect leaders who won’t pass them.