Out of the Mouths of Babes – The Best Explanation 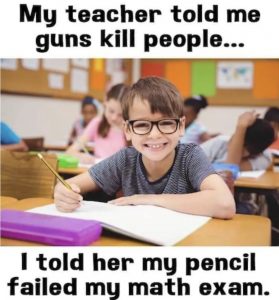 I had another topic in mind for this week but decided on a last minute change. I posted a picture, that I found humorous, on the San Diego County Gun Owners (SDCGO) Facebook page. In about 24 hours the post had reached over 23,000 people, had 750 reactions, and inspired over 500 shares. Since there seemed to be so much interest, I felt the topic warranted further examination.

The picture, for those who haven’t seen it, shows a smiling young boy sitting in a classroom. The following is included on the picture: “My teacher told me guns kill people, I told her my pencil failed my math exam”. Most found this humorous.

I don’t know where this meme originated so I can’t credit its very creative author. I found it in a weekly feature on the Powerline Blog called The Week in Pictures. Each Saturday morning, Steven Hayward of Powerline publishes a humorous collection of pictures gathered from around the internet that week. The Powerline Blog is a great source of conservative political analysis and I highly recommend it.

The meme counters, in a very concise way, a very common bit of fantasy often used by gun control extremists. A gun can no more kill someone than a pencil can pass a math exam. Using the image of a child and a bit of humor is a great way to counter one of the left’s most ubiquitous and dangerous pieces of misinformation.

Gun control extremists deal in emotion, misinformation, and ignorance rather than facts. They really have no choice since the positions they take are never supported by facts. Normal Americans who support our Constitution and the Second Amendment (2A) tend to deal more in facts. This is why both sides often talk past each other.

With anti-2A extremists in power in both Washington DC and California, Americans in general, and gun owners in particular have much with which to be concerned. These extremists seem to be a humorless group filled with hatred for those with whom they disagree. It’s encouraging to know that most Americans are not that way and that we gun owners still have our sense of humor.

As we celebrate this holiday, we remember those who are no longer with us. Those who made the ultimate sacrifice so that we can live our lives and enjoy our great country. Know that their sacrifice was not in vain. Know that the extremists are but a temporary setback for our great country. Know that normal Americans will prevail in 2022 and even more so in 2024. In the meantime, never lose your sense of humor and may God Bless America.

Previous PostFrom Boo to Boom – The Evil Ghost Gun
Next PostDo Those Around You Know What To Do During A Critical Defense Incident?