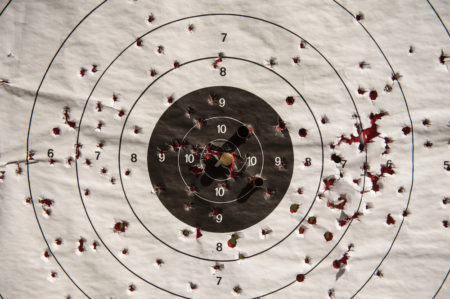 So I realized something that my shooting and cable news have in common.   We both would rather be fast than accurate.

I’ll be the first one to admit that when I take a rifle or pistol class with some of my friends, there is a good chance by the end of the day we will all race from the go command to be the first one to send a round or two downrange. Call it ego, but the balance between speed and accuracy goes out the window faster than the bullets I’m sending downrange. At that point it’s not about tight groups, it’s not about well placed shots, it’s about speed, and accuracy just isn’t important.

I’ve noticed that this seems to be the trend with the mainstream news today. Some kind of event occurs and all the networks and their affiliated websites, social medias etc., race to throw up dramatic attention grabbing headlines, each more salacious than the last. Reporters run around the crime scenes searching for anyone or anything new that will justify the opportunity for a live on scene report. Unconfirmed rumor delivered as fact, justifying a complete lack of evidence because it’s a “developing story”. Just like my shooting, investigative journalism has placed importance on speed over accuracy.

I have a theory. I believe that mainstream media has a new business model.   It’s simply to make the consuming public as uncomfortable as possible, 24 hours a day/ 7 days a week. The more uncomfortable the public becomes, the more information they seek out. The information delivered in such a way to make the consumer even more uncomfortable, which restarts the cycle and keeps them glued to the TV.  Each major network pushing the intended narratives, understanding that the audience isn’t looking for truth, but general reinforcement of opinion. It’s the new constant cycle full of bias information and alternative facts.   The faster the news comes out, the quicker the cycle repeats.

Even if there is no major event to report on, there is a seemingly endless supply of anonymous “sources” all feeding into whatever chosen narratives network are pushing. Almost daily some new story emerges as some unknown source leaks something that may or may not exist. Just like my shooting, the news is put out faster than it can confirm the accuracy of what is being reported. Combine this with an army of expert party line pundits who shoot off their extremist opinions like gospel, belittle anyone that isn’t in complete agreement, and we have a complete loss of truth and dialogue.

So in the famous words of Ricky Bobby, “If you ain’t first you’re last”. But this isn’t Hollywood, we aren’t racing, and this isn’t shooting. The American people deserve media that they can trust. So let me ask, how do you like your news, fast or accurate?