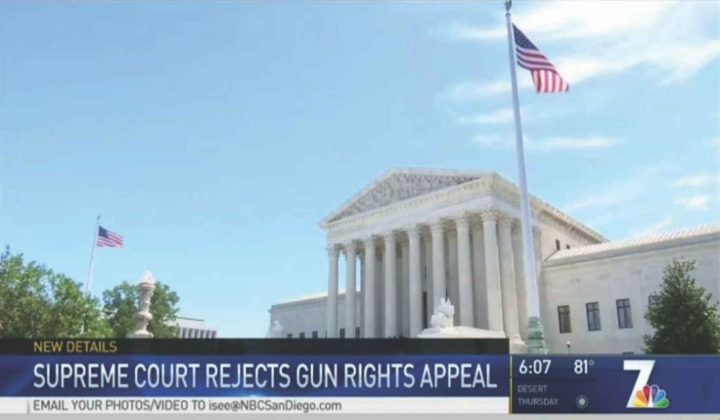 The Supreme Court refused to hear a controversial case that originated in San Diego on Monday, about whether Americans have a constitutional right to carry guns outside their homes.

The case began when San Diego County Sheriff William Gore rejected a man's application for a concealed weapons permit, and the man sued. By refusing to hear the case, the justices have essentially left it up to the states to make their own rules.

“Our concern has always been that in many cases, people have to be a victim first before they're able to show good cause," said Paul Neuharth, the attorney who represented plaintiff Edward Peruta.

Back in 2009, Peruta's case involved an appeal challenging the requirements to obtain a concealed carry permit in California. Peruta's application for a concealed weapons permit was rejected by Sheriff Gore.

This legal battle heavily focused on the discretionary decision by law enforcement to select who is granted the permits.

It's up to the applicants to show "good cause," so that the sheriffs and police chiefs may decide to grant a permit for them.

The executive director of a gun rights advocacy group, Michael Schwartz, said the policy is too broad at specifying qualifications for gun ownership.

"The court case isn't nearly as frustrating as Sheriff Gore's extremely vague policy when it comes to Good Cause," said Schwartz, from the San Diego County Gun Owners group.

He said this is an opportunity for the sheriff to review his policy.

"What is his good cause policy? Some people qualify. Some people seem to be in the exact same situation and they don't qualify," added Schwartz. "This decision does not limit or hinder his ability to change his policies to allow law-abiding trained citizens to get a concealed-weapon permit."

The high court decided in 2008 that the Constitution guarantees the right to a gun, at least for self-defense at home.

But the justices have refused repeated pleas to spell out the extent of gun rights in the United States, allowing permit restrictions and assault weapon bans to remain in effect in some cities and states.

California generally prohibits people from carrying handguns in public without such a permit. State law requires applicants to show good moral character, have good cause and take a training course.

In San Diego County, the sheriff required applicants to show supporting documents such as restraining orders against possible attackers to show good cause for a permit.

Neuharth said there is no uniformed definition of a good cause statewide.

Good cause could include a person who has been a victim of a crime, has taken out a restraining order or who carries large amounts of cash.

Neuharth also said he wonders if the courts can not infringe upon guaranteed rights like free speech and freedom of religion, why is the Second Amendment different.

“We are in support of people having their right to bear arms," said Ron Marcus, spokesperson for the Brady Campaign to Prevent Gun Violence.

"But going through proper processes, to be screened, and to know that those that have guns, that are using those guns have been vetted, they're using them safely, they're trained. That's how we keep people safe," added Marcus.

SDSO released a statement about the Supreme Court's decision not to review the case:

"Based on the Supreme Court's decision today, the ruling by the 9th Circuit Court of Appeals will stand, and the procedure of obtaining a license to carry a concealed weapon within the County of San Diego will continue as it has since the 1980s," said the statement.

The Ninth Circuit analyzed the history of the right to bear arms in the case of Peruta v. California and decided that the Second Amendment does not protect the right to carry concealed firearms in public, explained the statement.

In June 2016, an 11-judge panel of the 9th U.S. Circuit Court of Appeals said law enforcement officials can require applicants for a concealed weapons permit to show they are in immediate danger or have another good reason for a permit beyond self-defense.

Justices Clarence Thomas and Neil Gorsuch said the court should have reviewed the appellate ruling. Thomas said the decision not to hear the case "reflects a distressing trend: the treatment of the Second Amendment as a disfavored right."

More than 40 states already broadly allow gun owners to be armed in public.

The high court also turned away a second case involving guns and the federal law that bars people convicted of crimes from owning guns.

The Trump administration had urged the court to review an appellate ruling that restored the rights of two men who had been convicted of non-violent crimes to own guns.

The federal appeals court in Philadelphia ruled for the two men. The crimes were classified as misdemeanors, which typically are less serious, but carried potential prison sentences of more than a year. Such prison terms typically are for felonies, more serious crimes.

The administration says that the court should have upheld the blanket prohibition on gun ownership in the federal law and rejected case-by-case challenges.

Justices Ruth Bader Ginsburg and Sonia Sotomayor said they would have heard the administration's appeal.