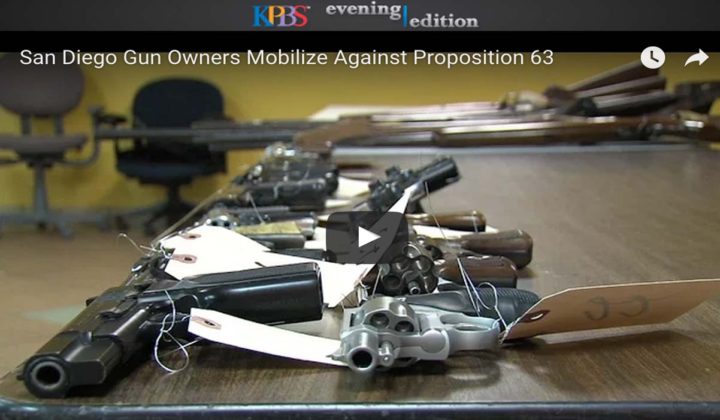 San Diego County Gun Owners PAC is starting to organize local opposition to Proposition 63, a collection of gun regulations that would make gun theft a felony and require gun owners to quickly report lost or stolen guns to police, among other provisions.

Spearheaded by Lt. Gov. Gavin Newsom,Proposition 63 would also require background checks to buy ammunition and ban owning magazines with 11 or more bullets. But those provisions were already part of a series of billssigned by Gov. Jerry Brown earlier this month. Brown vetoed bills on reporting gun theft and making such theft a felony.

Michael Schwartz, executive director of San Diego County Gun Owners PAC, said the speedy reporting requirement for gun theft unfairly puts responsibility on victims. He is also sharing ways gun owners can modify their weapons to avoid the state's new ban on guns with so-called bullet buttons, which make it easier for shooters to quickly reload ammo magazines. Gun owners who had those weapons before 2017 would be exempt from the ban, but would have to register them with the state as assault weapons.

"Our members want to know, whether or not I agree with this law, what do I need to do in order to comply with this law?" Schwartz said. "These laws are affecting the law abiding."

Schwartz joins KPBS Midday Edition on Friday with more on what owners are doing to avoid registering their guns as assault weapons.