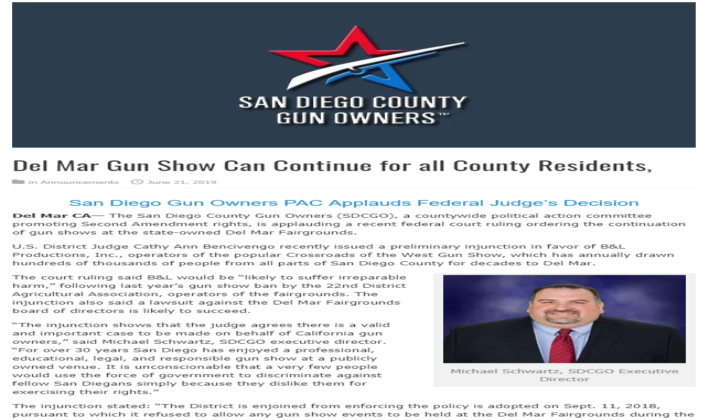 U.S. District Judge Cathy Ann Bencivengo recently issued a preliminary injunction in favor of B&L Productions, Inc., operators of the popular Crossroads of the West Gun Show, which has annually drawn hundreds of thousands of people from all parts of San Diego County for decades to Del Mar.

The court ruling said B&L would be “likely to suffer irreparable harm,” following last year’s gun show ban by the 22nd District Agricultural Association, operators of the fairgrounds. The injunction also said a lawsuit against the Del Mar Fairgrounds board of directors is likely to succeed.

“The injunction shows that the judge agrees there is a valid and important case to be made on behalf of California gun owners,” said Michael Schwartz, SDCGO executive director. “For over 30 years San Diego has enjoyed a professional, educational, legal, and responsible gun show at a publicly owned venue. It is unconscionable that a very few people would use the force of government to discriminate against fellow San Diegans simply because they dislike them for exercising their rights.”