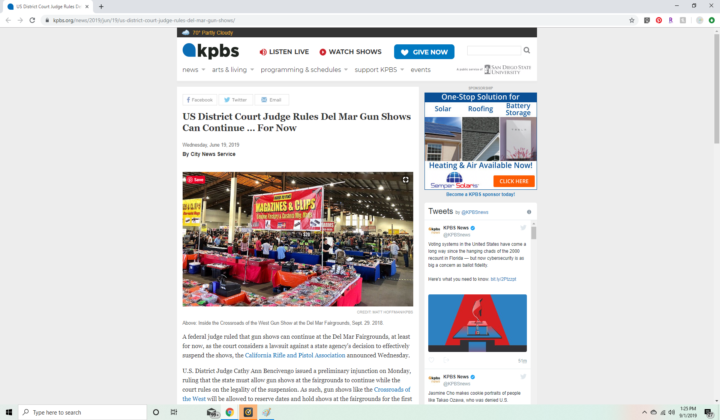 A federal judge ruled that gun shows can continue at the Del Mar Fairgrounds, at least for now, as the court considers a lawsuit against a state agency's decision to effectively suspend the shows, the California Rifle and Pistol Association announced Wednesday.

U.S. District Judge Cathy Ann Bencivengo issued a preliminary injunction on Monday, ruling that the state must allow gun shows at the fairgrounds to continue while the court rules on the legality of the suspension. As such, gun shows like the Crossroads of the West will be allowed to reserve dates and hold shows at the fairgrounds for the first time since last December.

The state's 22nd District Agricultural Association Board of Directors, which oversees the Del Mar Fairgrounds, voted last September to temporarily ban the sale of guns and ammunition at the fairgrounds until state legislators could iron out concerns about on-site purchases.

The vote effectively suspended gun shows at the fairgrounds after Jan. 1, prompting the CRPA to file suit against the state of California. The National Rifle Association and the Second Amendment Foundation are also supporting the CRPA in its grievance.