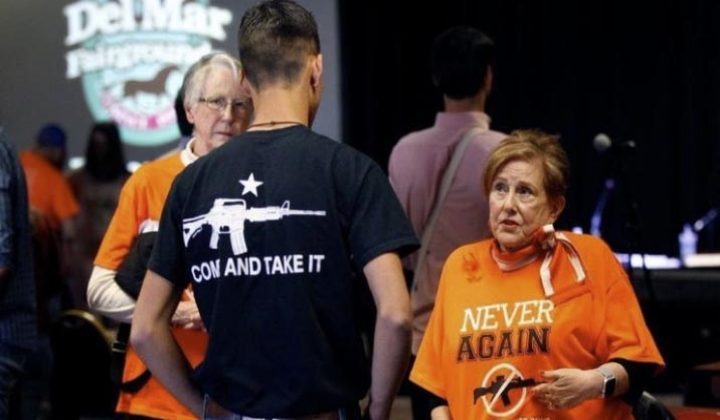 The board that oversees the Del Mar Fairgrounds unanimously agreed Tuesday to review its policies for the controversial gun show that is held there four times a year.

Scores of speakers addressed the board in the wake of calls to ban the popular Crossroads of the West Gun Show, with supporters of the show outnumbering opponents by at least four-to-one.

“I would like our own analysis of what we have heard here today,” said David Watson, one of nine directors on the board of the state-appointed 22nd District Agricultural Association board of directors that runs the Del Mar Fairgrounds.

He and the other directors agreed to ask staffers to gather more information about the economics of the show and policies regarding its frequency and age restrictions. They agreed to place the matter on the agenda for a report and discussion in September.

The Del Mar, Solana Beach and Encinitas city councils, all urged by their residents, have approved resolutions in recent weeks calling for a ban on the gun shows at the fairgrounds. While there have been movements to ban the show before, the issue arose again after the shootings that killed 17 high school students and faculty members in Parkland Fla., in February.

The gun show has been held at Del Mar for 28 years, and the company has five other shows in California and more in Arizona, Nevada and Utah.

Some men and women Tuesday recalled attending the Del Mar show as children with their parents, and said they now happily take their own children to the event.

“These people are all the salt of the earth,” said Rob Sanford. He added that he’s been to many of the shows with his family, where they often purchase clothing and gun supplies, but never guns.