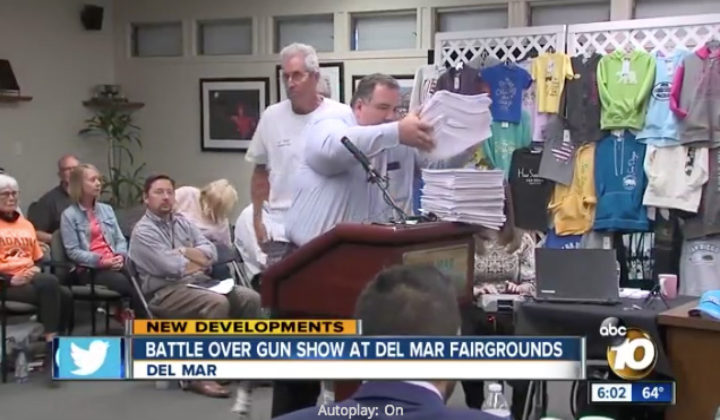 The battle over the Crossroads of the West Gun Show continued Tuesday in Del Mar.

A pro-gun, second-amendment political action committee collected more than 3,100 letters in support of continuing the show in Del Mar.

The letters were given to the board for review and consideration. Michael Schwartz, Executive Director of the San Diego County Gun Owners is pushing is pushing for the board to renew the shows contract with no restrictions or limitations.

"It took us less than a week to collect all these signatures, we could have gotten more. Some are written by entire families who come to the show every year. It is a family event with almost a 30 year history with Del Mar," said Schwartz.

Protesters also made an appearance at the board meeting dressed in orange and asking the board to cancel the shows current contract.

The Del Mar, Solanna Beach and Encinitas city councils have approved resolutions calling for a ban on the gun shows at the fairgrounds.

Guns can be purchased at the show, but California law requires extensive background checks and a waiting period.

The board will make a decision to cancel or continue the gun show at it's board meeting in September.